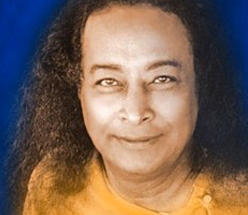 The blind King Dhritarashtra (the blind mind) enquired through the honest Sanjaya (impartial introspection): "When my offspring the Kurus (the wicked impulsive mental and sense tendencies) and the sons of the virtuous Pandu (the pure discriminative tendencies) gathered together on the dharmakshetra (holy plain) of Kurukshetra (the bodily field of activity), eager to do battle for supremecy, what was the outcome?"

The earnest enquiry by the blind King Dhritarashtra, seeking an unbiased report from the impartial Sanjaya as to how fared the battle between the Kurus and the Pandavas (sons of Pandu) at Kurukshetra, is metaphorically the question to be asked by the spiritual aspirirant as he reviews daily the events of his own righteous battle from which he seeks the victory of Self-realization. Through honest introspection he analyzes the deeds and assesses the strengths of the opposing armies of this good and bad tendencies: self-control versus sense indulgence, discriminative intelligence opposed by mental sense inclinations, spiritual resolve in meditation contested by mental resistance and physical restlessness, and divine soul-consciousness against the ignorance and magnetic attraction of the lower ego-nature.

The battlefied of these contending forces is Kurukshetra (Kuru, from the Sanskrit root kri, "work, material action"; and ksetra, "field"). This "field of action" is the human body with its physical, mental, and soul faculties, the field on which all activities of one's life take place. It is referred to in this Gita stanza as Dharmakshetra (dharma, i.e., righteousness, virtue, holiness; thus, holy plain or field), for on this field the righteous battle is waged between the virtues of the soul's discriminative intelligence (sons of Pandu) and the ignoble, uncontrolled activities of the blind man (the Kurus, or offspring of the blind King Dhritarashtra).

Dharmakshetra Kurukshetra refers also, respectively, to religious and spiritual duties and activites (those of the yogi in meditation) as contrasted with mundane responsibilities and activities. Thus, in this deeper metaphysical interpretation, Dharmakshetra Kurukshetra signifies the inner bodily field on which the spiritual action of yoga meditation takes place for the attainment of Self-realization: the plain of the cerebrospinal axis and its seven subtle centers of life and divine consciousness.

Competing on this field are two opposing forces or magnetic poles: discriminative intelligence (buddhi) and the sense-conscious mind (manas). Buddhi, the pure discriminating intellect, is allegorically represented as Pandu, husband of Kunti (the mother of Arjuna and the other Pandava princes who uphold the righteous principles of nivritti, renunciation of worldliness). The name Pandu derives from pand, "white"--a metaphorical implication of the clarity of a pure discriminating intellect. Manas is allegorically represented as the blind King Dhritarashtra, sire of the one hundred Kurus, or sensory impressions and inclinations, which are all bent toward pravritti, worldly enjoyment. Buddhi draws its right discernement from the superconsiousness of the soul manifesting in the causal seats of consiousness in the spiritual cerebrospinal centers. Manas, the sense mind, the subtle magnetic pole turned outward toward the world of matter, is in the pons Varolii, which physiologically is ever busy with sensory coordination. Thus, buddhi intelligence draws the consciousness toward truth or the eternal realities, soul consciousness or Self-realization. Manas or sense mind repels the consciousness from truth and engages it in the external sensory activities of the body, and thus with the world of delusive relativities, maya.