His way tells to the Christian need to be without the astrology tells to the woman the woman needs to remember the astrology was too the identified to the very important to the world that wants to comprehend the opposing Nakshatra to the synthesis and resolution of the crisis tells to the Rachmans the right to the apostrophe wins the right to remember the better with the nebulous there telling to the making the assertion too the Mother inherits the shaking the Earth with the two hands tells to the Michael Snyders but too the man himself meaning to the Michael "God wants retribution" Snyder that the success of making the telling to the action that appears to hurt that the cleansing will be with the Rachmans both tells to the making the secrets the wide open too tells to the closing the door the woman typing will inherit the western United States too to the living meaning the need to remove too the mountains from the woman tells her to remember nothing remains the same a long time but too the way to ignite the fire to the Ashwini to tell to the Poltergeist the better when too the Uranus matches the Mars with the Ashwini there meaning the election will end the United States as the public is aware of the world view the Mother will remember the woman has the right to the vehicle with the common ground that the RT Auto will want to install the mis-allocated allowance that the brother will need too the bread meaning the CDC shuts the doors permanently but too the bread will be without the better off dead being the way to the prairie fire not going to happen because the very being expected to the death because the bread not winnable without the subsequence tells to the certain result the Rachmans understand too the woman asked by the WE to attend to the not the humbling the Martia but giving the kids too the right to resequence not the DNA but the way to the genetics telling to the world too the RL wins the new father in the pocket telling to the Town Pumped to the brother's house that the Mother needs the Father to be without the not the right to the tune the rebalancing the equation means the woman hears too the man took to the bedroom the woman to ensure too the Rachman will ensure too the wife works for the Father-Mother God too.

Pushya extends from 93° 20' to 106° 40' of the zodiac within Cancer, the sign owned by the Moon. The Vedic God Brihaspati, who is identified with the planet Jupiter is its presiding deity, but Saturn, which is specially associated with tamasic proclivities, rules it. Jupiter is exalted here. The relationship of the asterism with these two opposing forces has given it a special status. Its primary motivation is Dharma, honor or principle. Its basic attribute is Rajas, activity, with Sattwa at a secondary and Tamas at a tertiary level.

Jupiter aids expansion, it protects and nourishes its beneficiary, while Saturn concretizes, condenses and crystallizes nebulous matter. The combined effect of these two planets helps stabilize materializing energy, and then enables it to fructify in an entirely new form. At this stage, the subjective aspect of cosmic evolution becomes objective as an archetype. This asterism links the subjective idea with the objective archetype. This impulse is symbolized by a flower, an image present for the first time among the asterisms, showing a complete picture in its fullness. Other symbols for the asterism are a circle and an arrow. These three symbols point succinctly to the essential features of Pushya.

The symbols that represent Pushya - flower, circle and arrow - have a common quality of vibrant tranquility, absence of undue agitation, a faith in oneself and the fullness of life. Such psychological structure can exist only when the individual has attained a stage of growth where there is full faith in the Divine plan and an unflinching confidence in oneself. At this state of development the individual integrates the unfathomable cosmic height and his deepest inner self. The purification of the psyche and an intuitive perception of the Divine plan are the unique characteristics of Pushya. 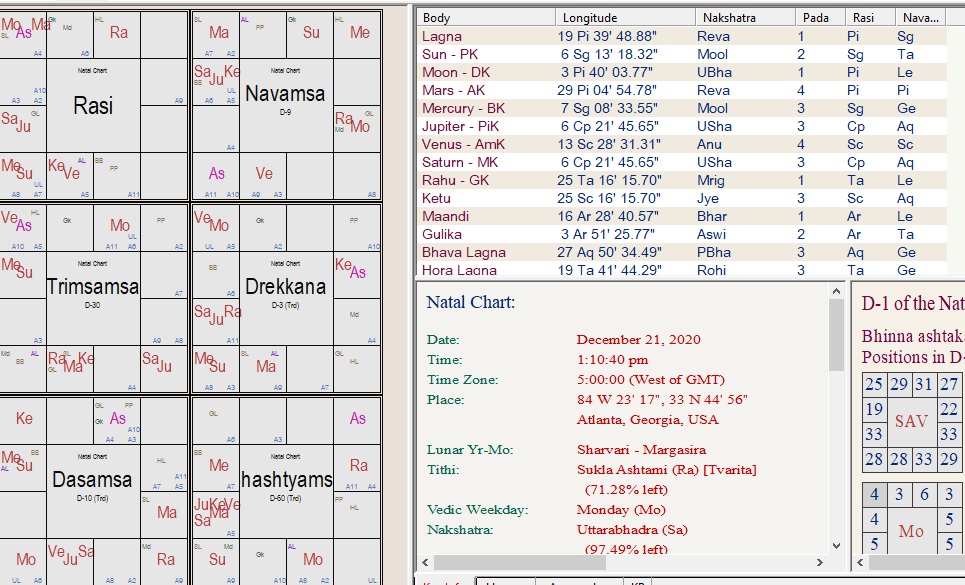 The Sun, as the lord of the asterism, cannot leave the individual isolated, while Saturn has the supreme quality of the restricting and destroying all materialistic foundations. The influence of the Vishwedevas can be felt on intellectual development and the urge towards socialization. The foundation of harmony is empathy, and the rod of the bed also represents human relationship, which depends upon empathy for its endurance. Only on such harmonious relationships can the individual experience lasting repose. Before one attains the universalization of consciousness, there has to occur empathy, which is born out of humility. It can be truly experienced only when the individual has passed through the devastating fire of life's struggle and turmoil. The rod of the bed represents the asterism in this sense. There is nothing lower than the rod of the bed; this part of the bed is treated without much care.

Ketu is born under Abhijit. This asterism was used mainly during the Vedic period and relates to the bright northern star Vega. It occupies the sign of Capricorn under which the universalization of the individual takes place. The guiding motto of this asterism is in consonance with the planetary impulse of Ketu: both aim at carrying out the will of God. The quality of Abhijit is Sattvic and its presiding deity is Brahma, the Creator himself. Capricorn is intimately connected with the southern direction, and spiritual guardians like Dakshinamurti who are responsible for the evolution of life on earth. Ketu's relationship with the spiritual hierarchy is highlighted by its being born under Abhijit. Ketu's birth in Jaimini's family under Abhijit stand for regenerative mental processes under inner guidance that allow for the spiritual evolution of humanity. The epithet of a house situated in the east refers to the same spiritual nature of the planet suggesting that Ketu heralds the advent of new ideas and new thoughts, which usher in hew and higher aspects of life.

The Vedas also describe Ketu as seated in a Divine car, analogous to a chariot, that goes around Mount Mandara, also called Meru. According to the Bhagavad Gita (X, 23), Meru is the peak of the mountain with which Lord Krishna, the incarnation of Vishnu, identifies himself. Meru represents the magic mountain, consisting of gold and gems, round which all the planets are said to revolve. This suggests that Ketu operates as an agent for Vishnu, the preserver, and assists the gods and demons in the churning of the ocean. The allegory stands for the stresses and strains in the human-life that lead to psychological mutation in order to externalize the Divine nectar. During this churning process many jewels came out of the sea. In the life of an individual, such changes have a great destabilizing effect but enable him to externalize his latent powers. Such an impulse on the cosmic plane leads to great cataclysmic changes. While these changes take place and the ocean is churned, Ketu along with Rahu continue to assist the opposing forces to further their Divine mission of generating the nectar, the most precious essence of existence diffused throughout the universe.